- NEW: Increased performance when browsing the terms list in the Language Source (around 4x faster)
- NEW: Localize can modify case not only to UPPER and lower but to UpperFirst("This is an example") and to Title ("This Is An Example")
- NEW: Add a new version to the required Google Service
- NEW: Scenes List in the Tools tab can now be collapsed
- FIX: Google Translation was failing for some strings with mixed or title casing e.g. ("Not Enough Rope" was not translating)
- FIX: SetLanguage component Inspector was not showing. Now it displays a dropdown to select the language

Terms translated using Google Translator are now mark to let you know that a human translator should approve that translation. 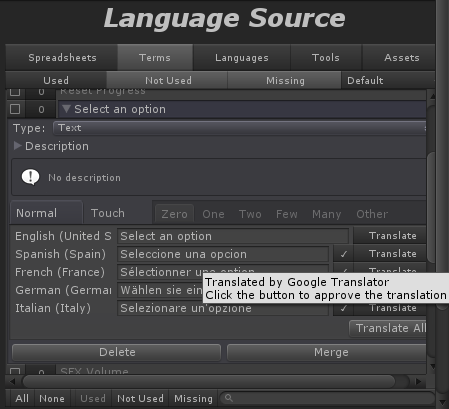 When the terms are flagged as Auto Translated, they are imported into Google Spreadsheets by using the GOOGLETRANSLATE formulae.
That way, any modification to the other columns will update the translation. Also those cells are highlighted with a different color to identify them.

NEW: The Callback in the Localize component now show all public methods of ALL monobehaviors in the Target object
NEW: Tool 'Parse Localized Terms" now allows searching for term usage in the SCENES and in the SCRIPTS 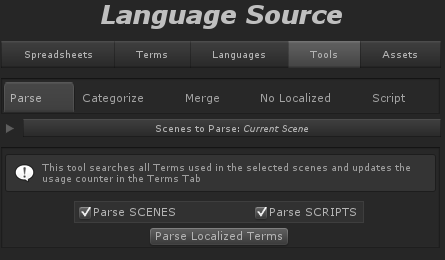 NEW: Localize was optimized to avoid localizing every time the component is enabled
NEW: Localize has now a setting for Pre-Localize on Awake or for waiting until the object is enabled.
NEW: Downloading from google uses now a custom format instead of JSON to avoid parsing errors

Localizing on Awake could result in a delay when the level is loaded but its faster later when objects are enabled.
If the toggle is set to false, it will Localize OnEnable, so will yield faster level load but could have a lag when screens are enabled
Each project has different requirements so it has been exposed this flag to select when the localization is updated. 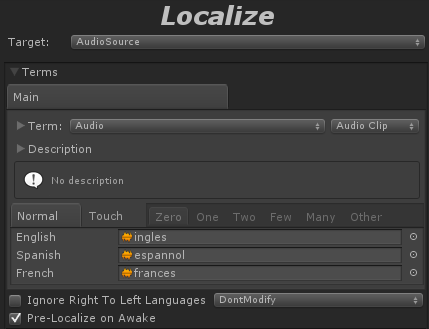 
This update requires installing the new WebService (v3).
After updating, please delete the old WebService from the google drive and click "Install" in the LanguageSource!
Are you

Last edit: 7 years 3 weeks ago by Frank.
The following user(s) said Thank You: wagenheimer
The topic has been locked.
Less More
6 years 8 months ago - 6 years 8 months ago #1119 by Frank
Replied by Frank on topic Release Notes
2.6.1 b1
NEW: Multiline texts can be fixed correctly for RTL languages by specifiying the maximum line length (Localize Inspector) 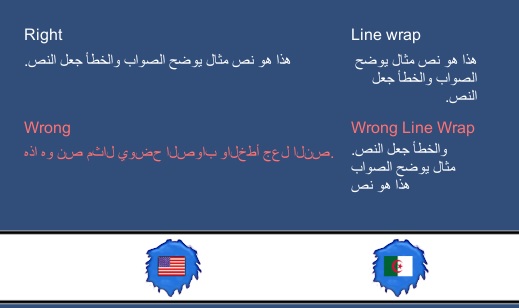 NEW: Added a checkbox to the Localize Inspector to allow changing alignment for RTL Languages (Right when RTL, Left otherwise)

FIX: Switched loc order of Main and SecondaryTerms to localice the text/sprite after the font/atlas was changed
FIX: Editor UI for the Terms translation was overflowing.
FIX: Automatically Importing from Google will not longer clear the localization data 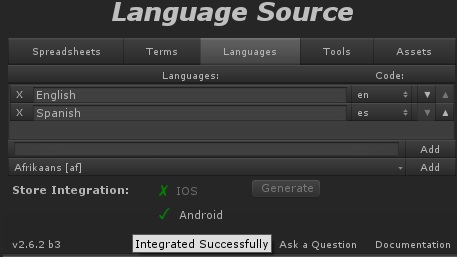 NEW: When editing a term, Translate and Translate All buttons will translate the Label's text instead of the Term name
NEW: Tool to find No Localized objects now saves the Include and Exclude filters
NEW: Added a Refresh button on top of the Terms list to quickly parse all localized objects in the scene

FIX: Alignment will not revert to "Left" when switching languages. RTL languages will still be adjusted correctly.
FIX: Parse terms was not detecting inferred terms used in Localize components that were not previously opened in the inspector
FIX: Importing spreadsheets with auto-translated terms having multiple lines was adding extra quotes.

FIX: Google translate Language code of all chinese variants was updated to the right code
FIX: Changing Term Categories or Renaming it will now update the language Source
FIX: Add button (+) after the Terms list is now always at the end of the terms, even when a term is expanded
FIX: When changing category in a term that its not in the source, it will display an error box showing why it fails

FIX: Sometimes the Resources folder failed to be created if it was previously created (when generating I2Languages.prefab)
FIX: TextField to edit the Term's description and translation has word wrap enabled to avoid expanding the inspector on long lines
FIX: Vertical scrollbar in the Terms list will now hide when all terms fit in the screen

DEL: Removed checking for installed plugins when scripts are compiled (will only happen at startup or if force from the menu)
Are you

Last edit: 6 years 8 months ago by Frank.
The topic has been locked.
Less More
6 years 7 months ago - 6 years 7 months ago #1196 by Frank
Replied by Frank on topic Release Notes
2.6.3 b2
NEW: IOS Store Integration (adds the languages to the info.plist file)
NEW: If the localize component, can find its inferred term in a source, it will use that term and stop inferring it
NEW: When adding a term to a source, the scene is parsed and every object inferring that term will start using it
NEW: In LanguageSource inspector, button "Add Terms" and "Remove Term" will use the selected term even if it doesn't have the checkbox ticked
NEW: When auto-generating ScriptLocalization.cs, if the file was moved, the plugin finds it and regenerate it in the new location
NEW: Non printable/special characters in the Terms name are removed from inferred terms to increase legibility
NEW: On the Terms list, the buttons at the bottom (All, None, Used, Not Used, Missing) now select from the visible terms not the full list.
NEW: Button "Show" next to each Language in the LanguageSource to preview all LocalizeComponents in that language
NEW: Clicking on a translation previews how it looks, but selecting another object will now stop the preview and revert to the previus language
NEW: Clicking a term from the list that shows when expanding the Term field in the Localize inspector will now set that Term
FIX: Compile error in TitleCase(s) when building for Windows Store
FIX: Android Store Integration was using a wrong path and now all generated files are in Plugins\Android\I2Localization
FIX: Textfield used to type the new category now allows typing \ and / to create subcategories
FIX: On the Terms list, the filters (Used, NotUsed, Missing) will now work correctly with categorized terms
FIX: Improved performance on the LanguageSource and Localize inspector. Now selecting a big languageSource its around 4 times faster
Are you

Please lets us know how to improve it!
To get the betas as soon as they are ready, check this out
Last edit: 6 years 7 months ago by Frank.
The topic has been locked.
Less More
6 years 7 months ago - 6 years 4 months ago #1207 by Frank
Replied by Frank on topic Release Notes
2.6.4 f3
NEW: SVG Importer has been integrated (support for SVGImage and SVGRenderer: localizes VectorGraphic and Material)
NEW: Updated to support TextMeshPro 5.2 beta 3.1 (previous versions need to change TextMeshPro by TextMeshPro_Pre53 in the scripting define symbols)
NEW: I2Languages.prefab has been moved to I2/Resources to make update easier (just delete I2/Common and I2/Localization and import the new package)
NEW: The spreadsheet will not be auto-downloaded when running in the editor as the local language source its supposed to be the most up-to-date
NEW: Better compatibility with UnityScript (added method versions to avoid default parameters, still needs to move I2L to the Plugins folder)
NEW: Inferred terms will be changed to normal terms as soon as a matching term its found
NEW: Added variables LocalizeManager.CurrentRegion and .CurrentRegionCode to get the region part of the language (e.g. "en-US" -> "US")
FIX: When re-starting the game after downloading a modified spreadsheet, it was loading the old translations
FIX: Error shown in the console when playing the game in the editor while a Localize component its shown in the Inspector
FIX: Parsing scenes failed on Unity 5.3+ when scenes where not in Assets folder
FIX: Adding a localize term before adding a target (TMPro label, UI Text, etc) failed to get the inferred Term
FIX: Selecting a Term in the localize Secondary Terms Tab, was changing the label's text to the name of the font/atlas
FIX: TextMeshPro was producing warnings regarding materials when previewing different fonts in Editor and not in Playing mode
FIX: Marking scene dirty when Localize callback and other variables are changed
FIX: Button "Add Term To Source" in the localize inspector was sometime adding the term to the wrong LanguageSource
FIX: Selecting <none> from the term's list made that option disapear the next time the popup was openned
FIX: IOS integragion will now correctly generate Info.plist instead of info.plist
FIX: When copying a Localize component and pasting it in other object will no longer keep a reference to the previous object
Are you

Please lets us know how to improve it!
To get the betas as soon as they are ready, check this out
Last edit: 6 years 4 months ago by Frank.
The topic has been locked.
Time to create page: 0.452 seconds
Powered by Kunena Forum
Template by JoomlaShine