We have a bug with I2 localization where when the device language of the phone is set to Chinese traditional, the texts appear as Chinese simplified. We have the language set up on the prefab and the other languages are working properly. We have seen this occur on android devices and on the emulator. Any advice on why this occurs and how we can fix it?

Less More
3 years 5 months ago #1655 by Frank
Replied by Frank on topic CN (traditional) appearing as CN (simplified)
Hi,
The plugin detects Simplified/Traditional using the Unity Application.systemLanguage variable.
In the SelectStartupLanguage() function queries that variable and selects the correct variant depending on the value reported by Unity (ChineseSimplified or ChineseTraditional).

Also, do you have a "Chinese (Simplified)" and "Chinese (Traditional)" languages in your I2Languages.prefab?

If so, does the translations to those languages are really Simplified/Traditional?

Those this issue also happens for IOS, PC or Editor? (to rule out a problem with the project settings)

I will be testing this today to see if I can reproduce the issue, but any further information will be helpful.

Thanks,
Frank
Are you

Yes, we have chinese simplified and chinese traditional on the prefab, attaching a screenshot here. The language seems fine when using the show buttons on the component editors. The other languages work fine. 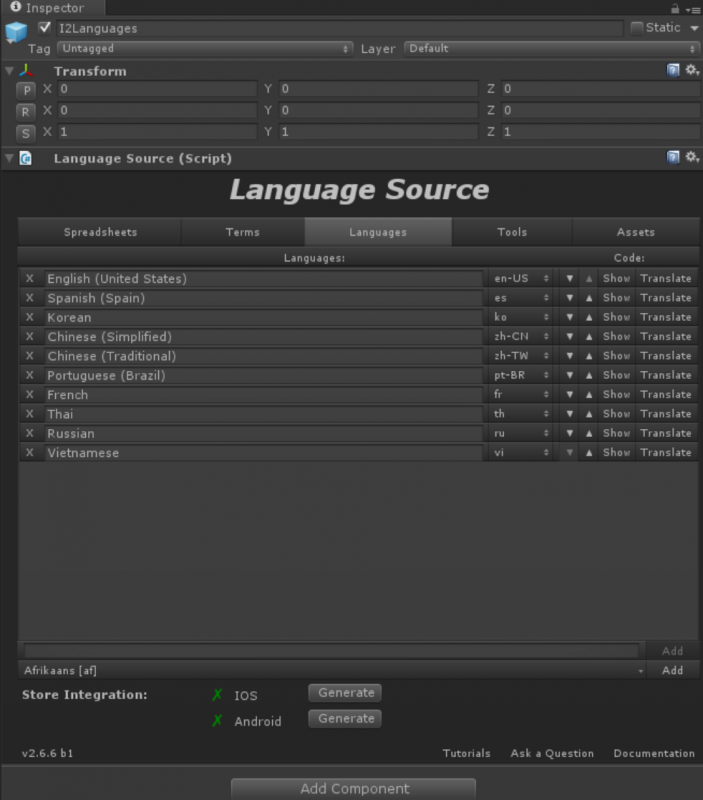 This issue happens on the android emulator and on android APKs. We have not tested on iOS and PC standalone (our app is android only).